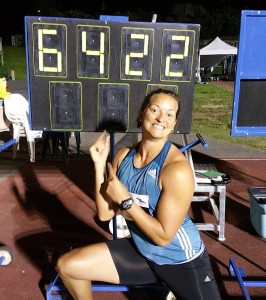 Jade Lally has produced the longest discus throw by a British woman since 1983 to move to fourth in the 2016 world rankings.

The 2014 Commonwealth Games silver medallist improved her English record to 65.10 metres at the New South Wales Championships in Sydney.

It puts her second in the all-time British list behind Scotland’s Margaret Ritchie, who threw 67.48.

It is the second time she has thrown an Olympic qualifying mark in three days.

The 28-year-old threw 64.22m at the Auckland Track Challenge on Thursday.