So my last blog was one meet to go before the deadline of the European Championship qualifier, and as the weather predicted, ’twas wet and stormy! However it did dry out for the start of the competition but there was no wind, something I was relying on to qualify. I had a pretty good series but only finished on 57.64m, so no Euros for me. On the plus side, I could now focus on the Commonwealth Games.

We go to Saturday 19th July where I would change from part time average Jo/ part time athlete, to full-time athlete for 16 days. I drove to Birmingham from my home in Horsham to a competition called Throws Fest. The weather was typically English during this ‘summer’ season which meant rain and heavy traffic most of the way. The competition was a complete wash out and in fact was cancelled after 5 rounds due to a lightning storm. I arrived so late for the competition I missed the entire warm up and ended up competing in trainers. After the comp I went and had some dinner, with my dad, in my wet trainers, then continued my drive to Manchester to join my English Teammates at our holding camp.

We stayed in Manchester until 22nd when we got on a little plane just for the England team to Glasgow. We were only on it for 25mins but I felt so big time, like a premiership footballer! We were greeted by, quite frankly, tropical conditions! Blue skies, sun blazing, bagpipes blowing (that bit not so tropical but amazing all the same)! Lots of very excited Athletes, Volunteers, and the very enthusiastic General Public.

A great welcome into Glasgow.

I shared a room with Izzy Jeffs (Javelin thrower) who I shared with in the 2010 Commonwealth Games in Delhi. My actual competition day wasn’t on until Thursday 31st which was my qualifying day. So I had 9 days from the day I got there to train, prep, see the physios and keep busy before my comp day. All that sounds easy enough to do but can be a big opportunity to mess things up! For instance, the biggest and most important piece of advice that athletes (former and current) give to other athletes is to keep things the same and don’t change anything. Now, when you are usually juggling work with training and are suddenly faced with a lot of ‘off time’, it is hard not to get carried away with either too much filling or too much resting. Luckily a similar timetable was used in the last Commonwealth Games and I knew how to manage my time. I generally filled my day with eating (in a food hall that is available 24/7), normal gym sessions at similar times to home and seeing the physio after most training sessions to make sure everything was in order. This was by far the most incredible feeling of being a full time athlete for this short period of time. I haven’t mentioned it on my blogs before but to give you some background, I recently found out I had a disc bulge in my lower back which had been giving me problems this year. Once we (UK Athletics) discovered what it was, my coach and I were able to manage things much better and work alongside UKA and Bridgeham Clinic for a series of rehab work to get me in the best shape possible for Glasgow. So once in Glasgow and able to live the dream, I saw my allocated physio twice a day for 5 days and my back problems literally disappeared. I had never felt in better shape.

During my qualifying rounds, I seemed to have suffered with some body malfunction of some sort and had dizziness and stomach pains throughout. I did attempt to tell my coach who just patted me on the back and told me I was just feeling nervous! Thankfully, I qualified exceeding the automatic mark of 57m on my 3rd round throw. When I got back to the village, I got worse and found myself in the polyclinic twice! Thank God for my roomie looking after me that night. I paid her back in managing to persuade the doctor to give both of us a lift on the ambulance golf buggy to our room. The next day, I was able to build on my qualifying rounds in the final. I produced the best series I’ve ever produced, including 3 seasons best. They included 59.56m, 59.98m and my furthest, 60.48m. That distance was enough to win me my first Commonwealth Bronze medal and my first lap of honour! Did a load of selfies and autographs for the kids. A slice of what the big timers go through on a regular basis!

I had some media interest the next day which was new. Two TV interviews although they don’t seemed to have made it on to our screens! Perhaps I am in need of some media training so I can say the right things during these interviews in order for them to be shown! Closing ceremony flew past so fast. Auld Lang Syne on the bagpipes was my favourite bit! That gave me Goosebumps. Then before we knew it, we were making our way back home again.

I reached my house at 2am after the drive back from Manchester where I left my car, went to work the 11hours later! I got a hero’s welcome when I walked through the doors, which was amazing.

Broadbridge Heath Leisure Centre really are very supportive of me!

Life post Games is much the same as pre Games, just with a lot more recognition around the track and Tesco! My next few weeks will be filled with finding competitions to try and continue the momentum and see if I can get even closer to my PB.

And of course cheering on my team mates that are in Zurich for the European Champs this week. 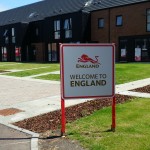 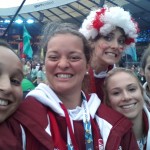 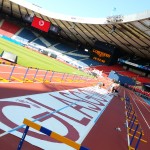 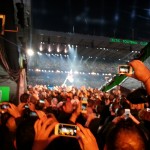 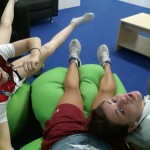 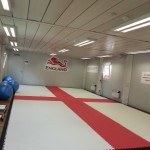 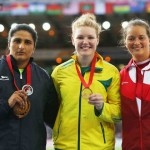 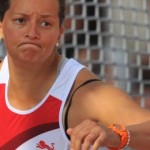 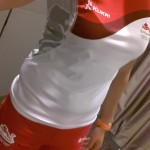